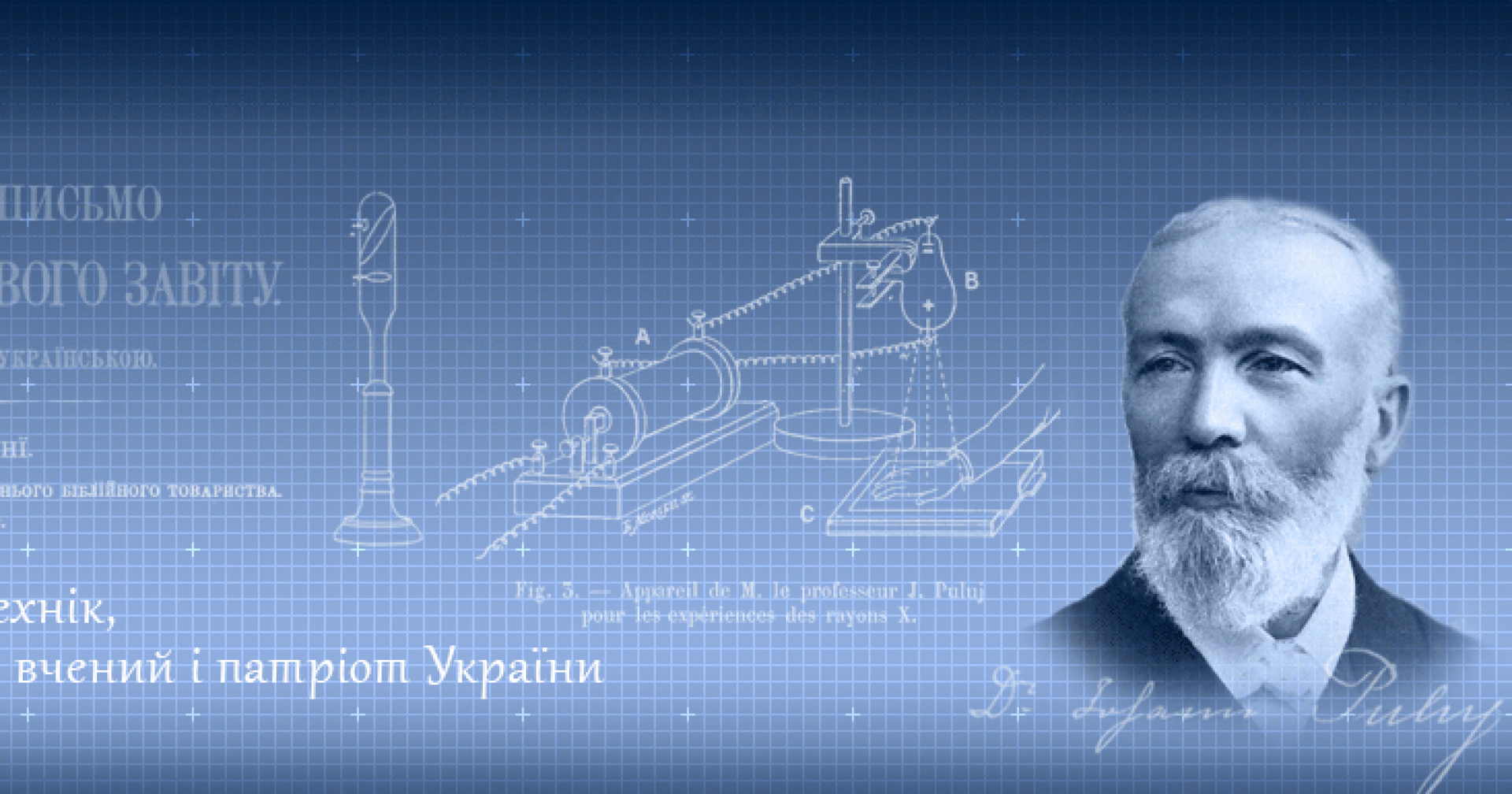 Ivan Puluj: life in the name of science and Ukraine (dedicated to the 175th anniversary of his birth)

Videos of the speeches can be found at this link: video of the conference

Ivan Puluj is one of the prominent figures in the history of world science, technology and culture of the late XIXth  century. The genius scientist was talented in various spheres and acieved  high level in all spheres of activity.  Physicist and electrician, designer and inventor, talented organizer of science and education, translator of the Bible, famous public and cultural figure.

The results of his first research in the field of molecular physics, performed in the physics laboratory of the University of Vienna, were highly praised by the creators of molecular kinetic theory and served the good turn of establishing it in the field of real gases. During an internship at the University of Strasbourg, the young scientist became interested in electrical engineering and electric discharges in rarefied gases.  Subsequent studies of gas-discharge processes, in particular the nature and properties of cathode rays, were reflected in prestigious European and American scientific journals of the time, paving the way for the discovery of X-rays and electrons. Some of the important properties discovered by W.C. Röntgen were first studied and described by I. Puluj and a lamp designed by Puluj 14 years before the epoch-making discovery became a prototype of an X-ray tube.  Scientists’ scientific hypotheses about the nature of cathode and X-rays have proved to be the most successful and still impress with their foresight.  This phenomenon is objectively reflected in the monographs Gajda R., Plazko R. Johann Puluj. Rätsel des universalen Talents. – Lwiw, 2001. – 264 S. and L’ Annunziata M.F. Radioactivity: Introduction and History, From the Quantum to Quarks, 2016, – p. 83.

In 1884, Ivan Puluj headed the Department of Experimental and Technical Physics at the German Polytechnic (Prague), with the invitation of the Ministry of Education of Austria-Hungary. Four years later he became the Rector of a higher education institution, and later – dean of the Faculty of Mechanical Engineering, in 1902 he founded the Department of Electrical Engineering, which he headed until retirement. The Prague period of the scientist’s life and activity is connected with electrical engineering and electric power.

His work on electrodynamics of alternating current became fundamental to theoretical electrical engineering, and the devices,that he has designed, were repeatedly awarded with prizes at international electrical exhibitions and were patented in many European countries. Some of them can still be seen in the museums of Vienna, Munich and Prague. A deep understanding of the problems of electric power and a large-scale approach to their solution raised Ivan Puluj to the level of the most authoritative experts in the design and construction of electrical power plants.

In 1906, for the diverse activities the scientist was awarded with the Order of the Iron Crown, the Comtur Cross of the Order of Franz Joseph, and in 1910, he received the high title of court adviser. In 1916, Ivan Puluj received an offer to head the Ministry of Education of the Austrian monarchy, which he rejected due to his health.

The position of our compatriot on the protection of the rights and freedoms of Ukrainians in both empires remained principled and uncompromising throughout his life, in particular, the right to free development and functioning of the native language, education and culture, the right to an independent Ukrainian State.Scientist’s life is the best example of sacrificial service to science and Ukraine.

THEMES OF THE CONFERENCE

Registration form, electronic version of the edited theses are to be submitted to the e-mail address of the organization committee (icip2020tntu@gmail.com)  by the 23th of September, 2020.